Catriona and Bex spoke to the children about their work and handed out Feed the Minds badges to everyone. 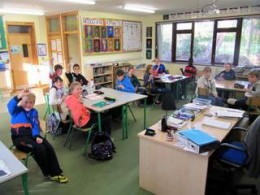 James Burrows was on top the Cathedral Tower, taken the day before. He released a balloon to symbolise the re-launch of Feed the Minds in Ireland.